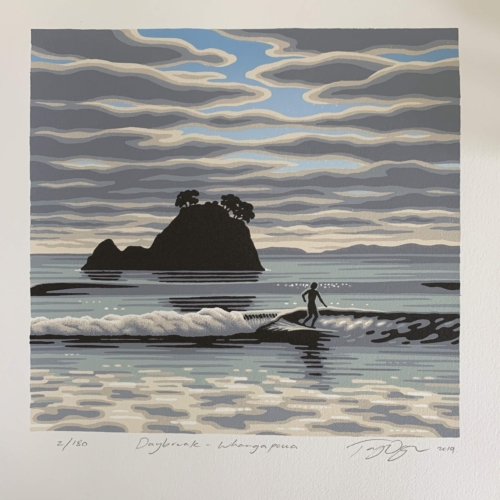 Tony began his art career in the early ‘80s after a brief stint in commercial advertising. He pursued his dream to work at becoming a fine artist and formed a partnership with a fellow artist setting up a screenprinting studio in Matapouri, north of Auckland. They began about teaching themselves to screenprint and were soon supplying prints to galleries in Auckland. The focus of these works was the Northland coastal landscape.

Tony returned to Auckland in 1984 and set up a working studio in Campbell’s Bay, on the North Shore of Auckland. He continued producing Limited Edition Screenprints and paintings celebrating the New Zealand coastline.

The opportunity to sojourn overseas arrived in 1985 when he joined American friends sailing around the world. He joined the yacht in the Seychelles Islands and sailed to the tip of Africa. Cape Town captivated him and within a year he was back and involved personally as well as artistically. He was a co-partner in an art, design and interiors shop for five years.

The insights over this time were very valuable artistically and commercially. With this newly gained experience under his belt, in 1991 he returned to New Zealand keen to be creative again.

Initially he supplied design objects to Auckland design stores before picking up where he left off. He established a new painting and screenprinting studio near Devonport before moving to Takapuna Beach and the Lake House. (An historic Victorian Boarding House now relocated in Takapuna as a functioning Arts Centre). Tony was very involved in the early stages of saving the house as an historic icon of Takapuna. In 1995 he organized the “End of an Era” exhibition with 25 other artists held in the House to draw public attention to its significance and fate.

In the late ‘90s he continued his career based in Takapuna whilst working on plans for a house and studio project at Bethells Beach, on Auckland’s West Coast.

He took residence in 2000 and began creating many works of the inspirational West Coast. He continued supplying several galleries around New Zealand and contributing to group and solo exhibitions.

After nine years on the rugged west side, in 2009 a new chapter began along with his young family in the eastern region of Gisborne, where he lives today with his English partner in their home overlooking Wainui Beach, and works from his studio in the heart of Gisborne.

His work continues to express the vibrancy, colour and authenticity that he’s known for, only achieved by someone who is in touch, in synch and fully entrenched in the lifestyle and beach life that is New Zealand.